Hobbyist magazines have published many guitar effects over the past decades. Tube tremolos were a thing in the 1950s, transistor tremolos, wahs and fuzzes in the 1960s and so on. Many of these pedals have some resemblance with commercial units, but... We'll see how that goes. I highly recommend you to try and build some of these old circuits. In this series of short articles I'll present you some of the most interesting (to me) projects from the years past. 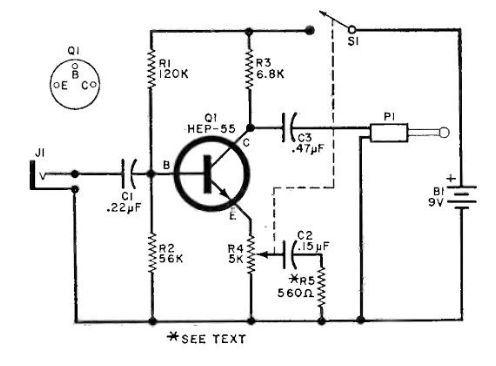 Treble boosters were once a very popular add-ons. Many amps were dark and muddy sounding when pushed into the overdrive, and anyway guitars had a hell of a time to cut through ever increasing stage volumes. Today Dallas Rangemaster is probably the most famous treble booster, used (at some time) by Rory Gallagher, Ritchie Blackmore, Brian May and many others. So 1969 was probably a very good time to publish an article about building your own treble booster. Let's see if it's any good...

As we can see in the schematic, this is a common emitter amplifier. Very basic text book circuit. Treble boost is achieved by adding a small value capacitor (in this case C2) to an amplifier circuit in order to allow AC signals to bypass the emitter resistor. All very basic stuff. But this treble booster does not work. Can you see why?

I'll spoil the fun: it's the R1, a 120kΩ resistor from the positive power supply to transistor base. It's too small. If we look at the LPB-1 schematic, we get some idea how to quess the correct value. With the values given in the article, HEP-55 doesn't bias correcyly. Yeah, I tried with original Motorola HEP-55. First instinct might be to make collector resistor variable. Just like in the fuzz face adjust it so that collector voltage is about 4,5V. It kinda works, but this is not the correct method.

Problem comes obvious when you adjust your guitar volume and tone controls. Noise, hiss, crackle and other interference will occur. This is because our treble booster has too low input impedance, and our transistor is still not biased correctly. So here's what to do: chance R1 to 560kΩ and optionally R3 to 10kΩ. Now it works much better! I have no idea why original author has chosen those resistor values, as they are clearly incorrect.

This is a common thing with magazine article effects. Idea is very solid, but the implementation is wrong. I understand they can't publish commercial circuits. But as I said, this is basic electronics: a common emitter amplifier. Not in any way a commercial circuit.