Quest to fix a vintage booster

Warning! Someone will lose their shit over this... 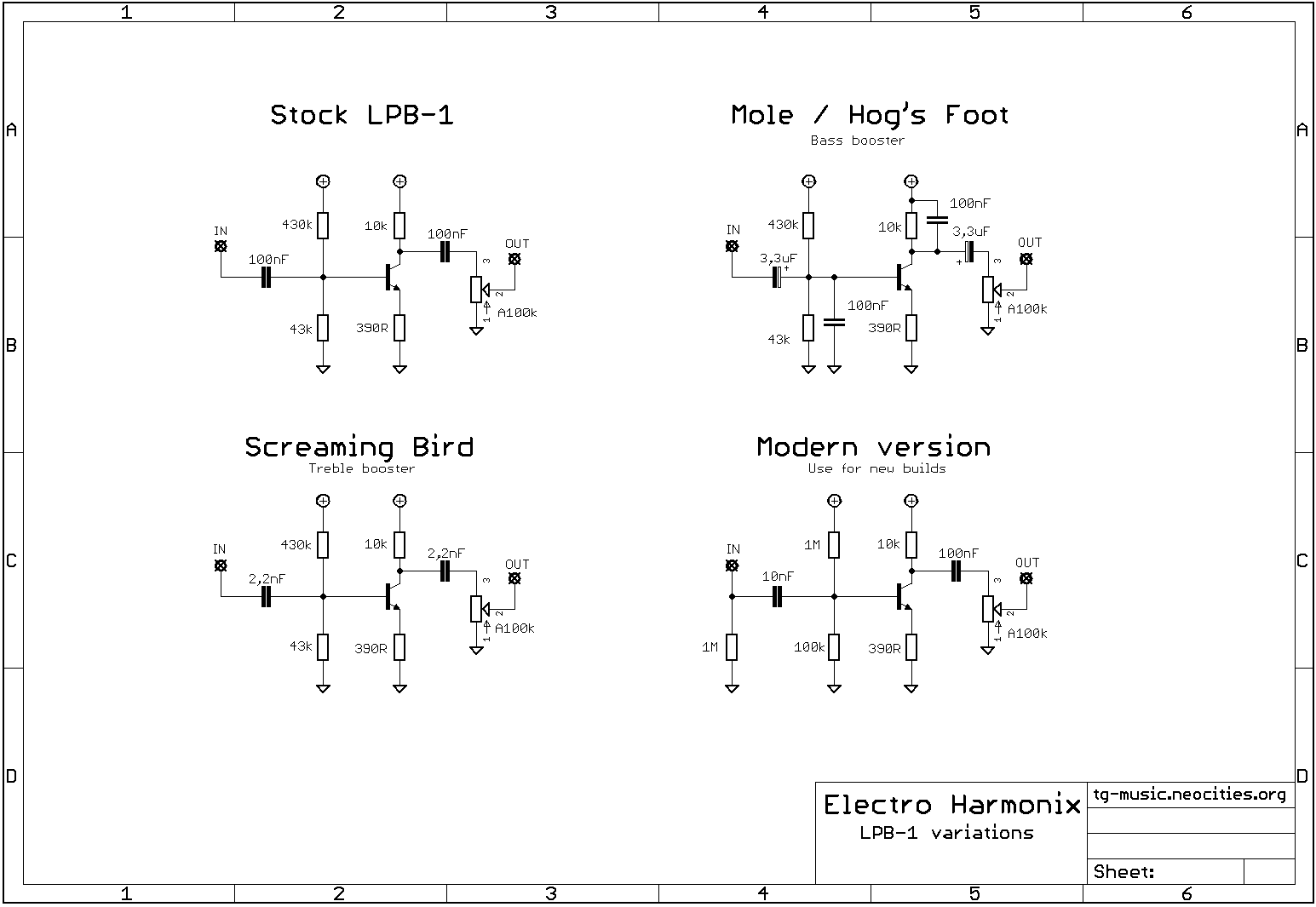 Electro harmonix Linear Power Booster is an important part of guitar effects history. It's also important part for many DIY builder’s history, me included. What Mike Matthews started over 50 years ago, both Electro Harmonix and we are still continuing. I'll rebuild my 1972 LPB-1. This will be a long drive, so buckle up.

Guitar effects were by no means a new thing when LPB-1 was created. By the late 60's reverb and tremolo effects were very much a thing and integrated into many amplifiers. And at that time fuzz, wah, univibe and other effects were all picking up thanks to players like Jimi Hendrix, Eric Clapton, Jeff Beck, Jimmy Page (Led Zeppelin), Pete Townshend (The Who) and Robby Krieger (The Doors). However, one thing none of those early effects did was to push the amplifier into the overdrive. This is where the LPB-1 comes in.

One dark night I was in a hurry to change battery to my 1972 version of LPB-1 and something just slipped and... Yeah. Crappy U.S. build quality and decades of (mis-) use finally came all together and the final straw was when the big ceramic coupling capacitor cracked. I knew it was a time for a complete rebuild.

LPB-1 and all of its derivatives are not magical devices by any means. LPB-1 is a very standard common emitter amplifier. This is one of the most basic building blocks of electronics. All text books have this as an example, and a math exercise! So, what can we do with one transistor, four resistors, two capacitors and a potentiometer? Let's see. 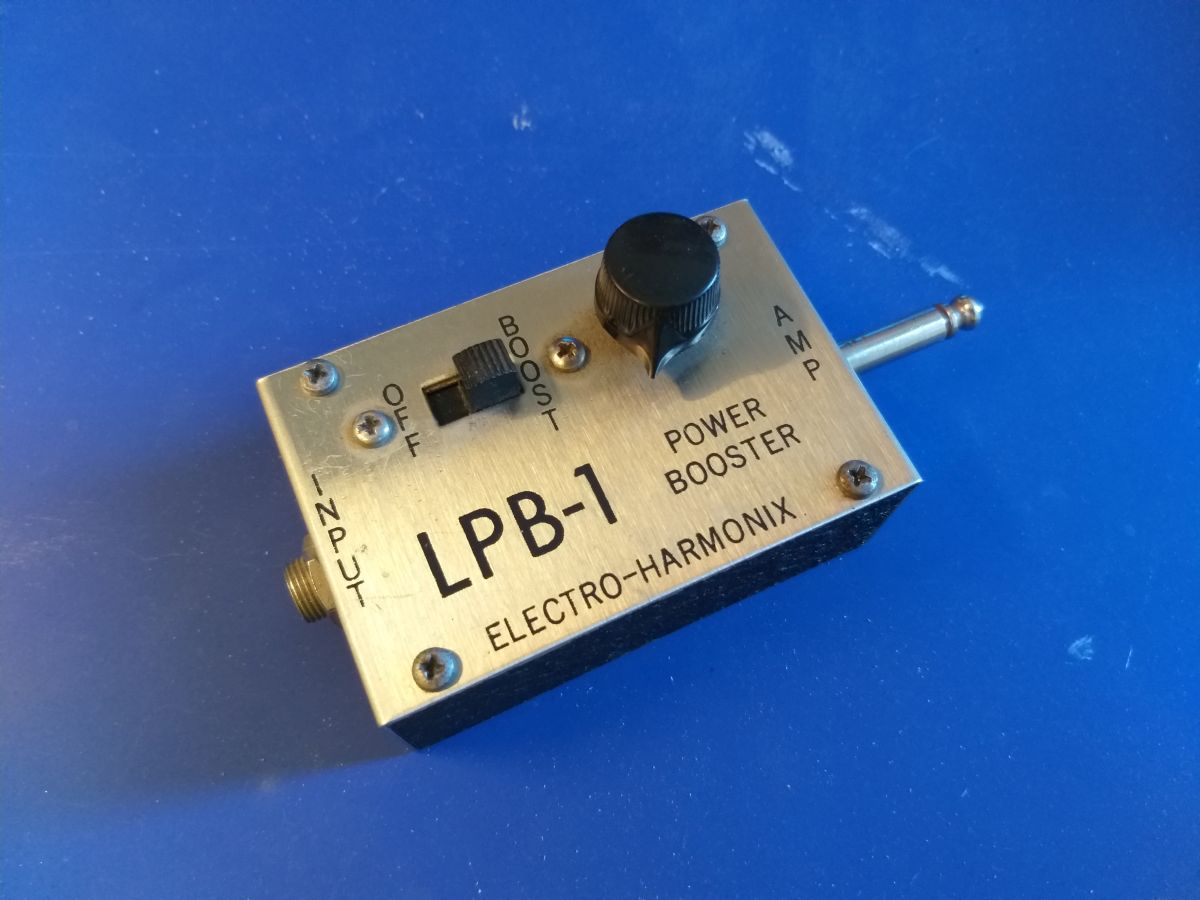 Electro Harmonix is famous for its habit of using inexpensive surplus components. This is very well known for big muff, but it's also true for LPB-1. I think they got a truck load of transistors marked as FS36999. This is a proprietary marking, and not from EHX. Often 2N5133 (from New Jersey Semiconductor Products inc.) is said to be the original type. 2N5133 is very expensive these days because... you know big muffs. Don't be fooled by ebay sellers. Most are fakes. I'm sorry, most are "not original". Luckily, we can use almost any bipolar (NPN) transistor for our clone. Most common ones are 2N5088, 2N3904, BC547, BC550... So just pick one you have. I've been using BC550 for a long time on all my effects, but this time I used ME4003 just for the cool TO-106 case. Oh yeah, why did I changed the transistor? I don't remember... My original was positive ground circuit with PNP-transistor. 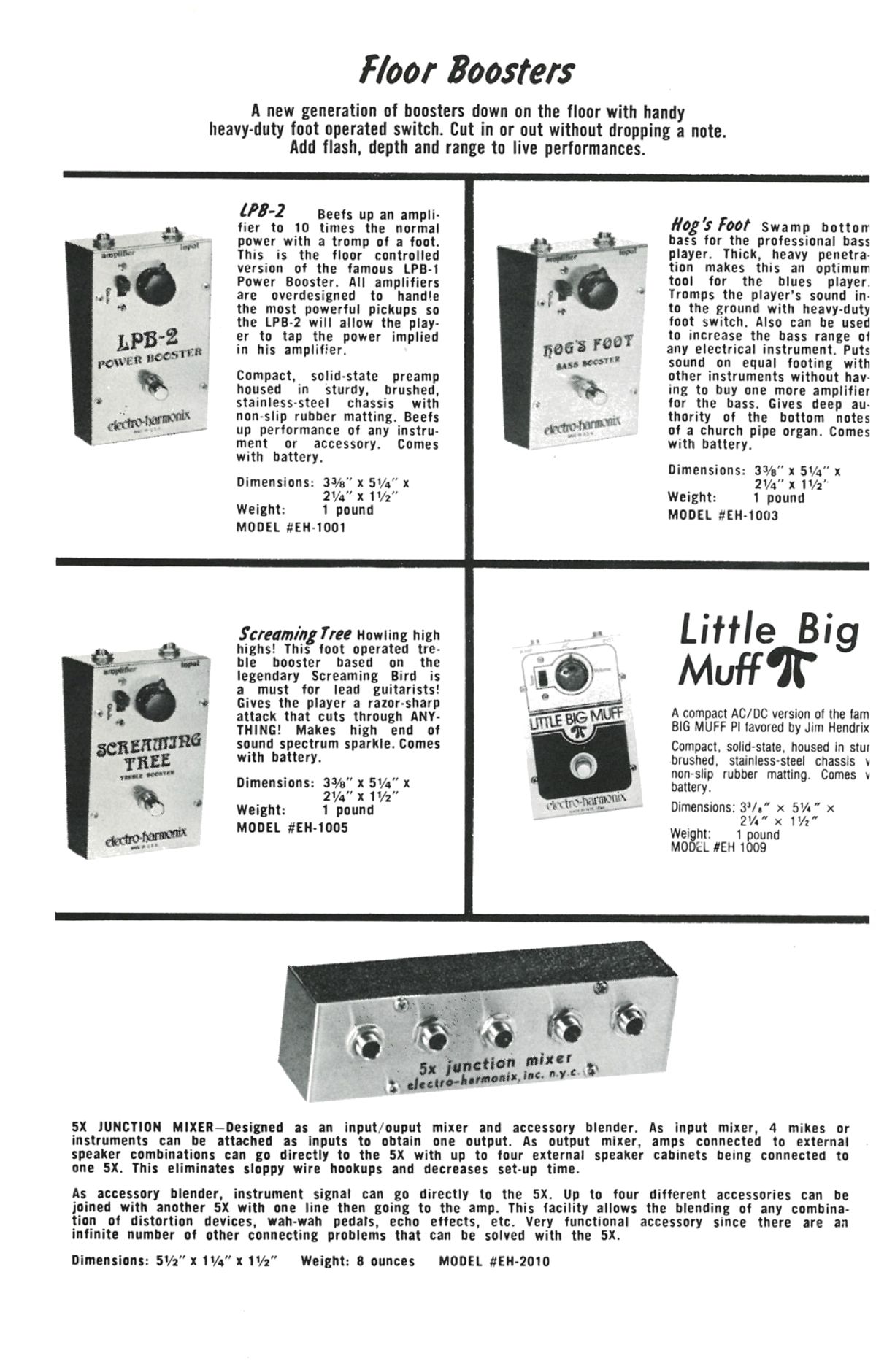 LPB-1 has two capacitors, both 100nF (0,1μF). Again, EHX used whatever they could get so capacitor types changed as well. They often used ceramic capacitors, but I have also seen a styroflex caps in LPBs. Modern mylar and plastic capacitors are very good, and most likely better than original ones. Probably in every way. So use those. Radial or axial doesn't matter. Wima MKS is always a good choice, but again most types will do. I used mylar caps with longer leads.

Capacitor values are altogether different thing. Together with 43k resistor and potentiometer these determine the high pass filter frequencies of the amplifier, and input capacitor especially has a big role to play. Original component values of 100nF and 43kΩ results 37Hz corner frequency. So full range boost for guitar. And if we use 2,2nF capacitors like in Screaming Bird treble booster, we'll have a corner frequency of ~1683Hz. For most modern uses I would choose a 22nF capacitor and that'll give us a ~168Hz corner frequency.

Output capacitor will allow only our amplified AC-voltage to go through towards our amplifier, blocking the DC-voltage from the battery. If this capacitor would leak (be broken) we would hear a crackle sound (with buzz and other noises) when we turn the potentiometer.

The current flowing through this resistor produces the voltage output of the amplifier. There is no reason to change the standard 10kΩ value. 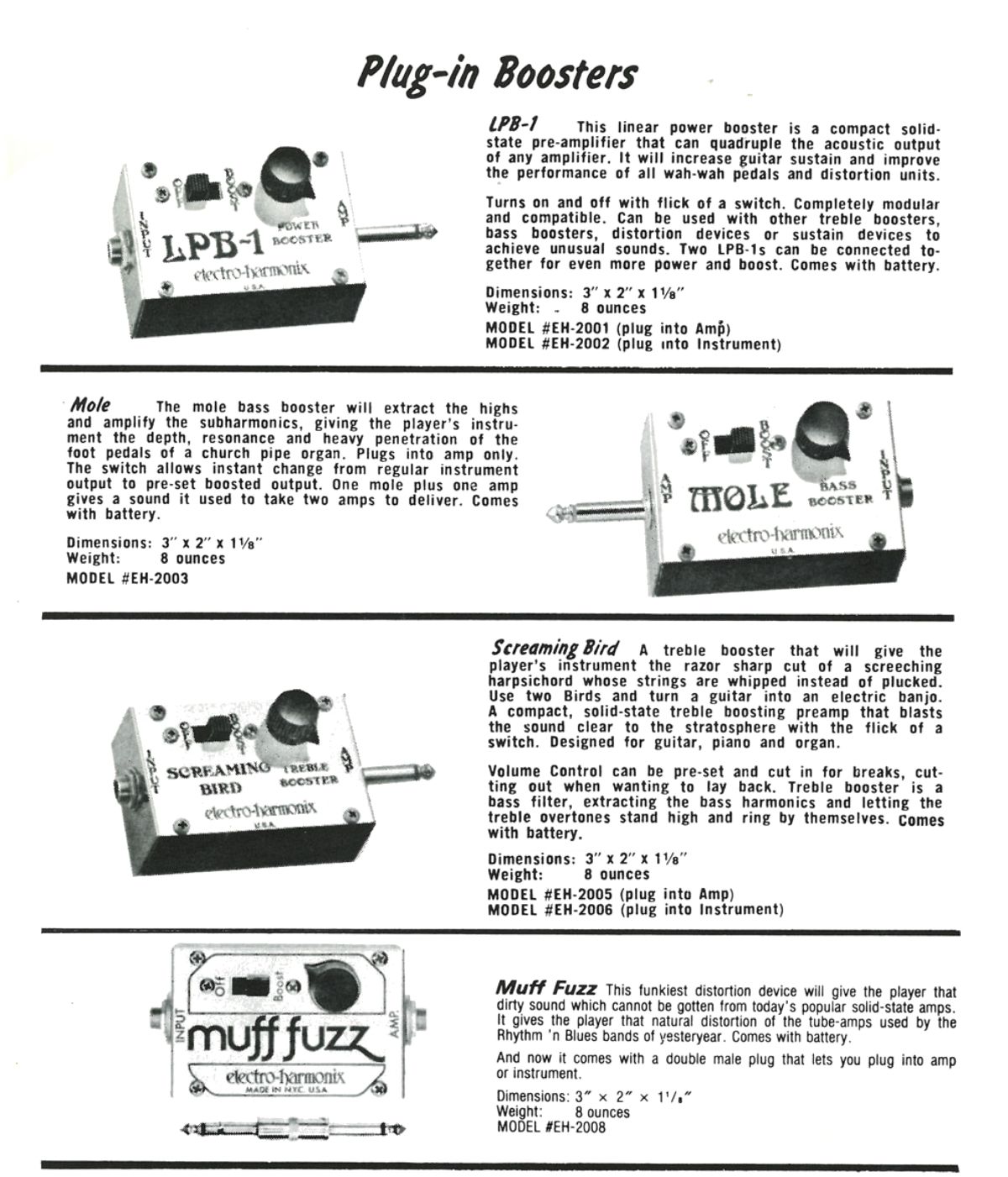 These two resistor form a voltage divider with their center point supplying the required base bias voltage to the transistor. Voltage divider is a common method of biasing a bipolar transistor amplifier. But like I said in the capacitors section, 43kΩ resistor plays a double role. It's also a part of high pass filter. Some modern versions of LPB use 100kΩ resistor (together with 1MΩ resistor), and this would change the corner frequency of the filter to 16Hz. So, way too small. If you go this way, change the capacitors too. 47nF capacitor will give a 34Hz corner frequency and it's close to original of 37Hz.

But as mentioned before, go smaller and move the corner frequency higher. Just a recommendation: if you use 1MΩ and 100kΩ resistor combination use 10nF input capacitor for about 160Hz corner frequency. This will be more suitable for most modern needs. 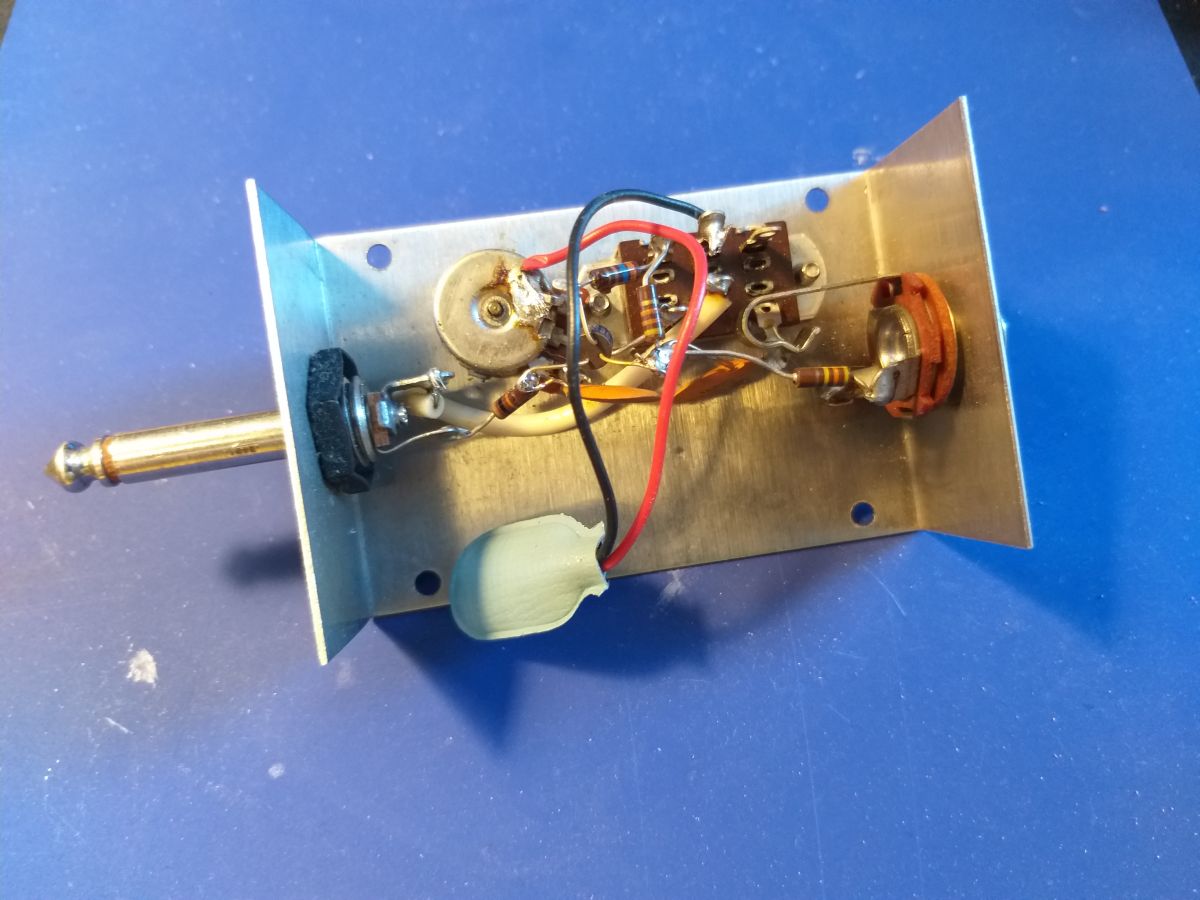 This is the important resistor that determines the gain of our pre-amplifier. Smaller the resistance, bigger the gain. Why is that? Because all the base and collector current from our little amplifier goes through this resistor to ground. In other words, the more we limit the current (by using bigger resistor) smaller the gain. And if we make the resistance too small the current will increase and we will get unwanted distortion and warm transistor.

Original LPB-1 is a plug-in booster. Plug into amp (like mine is) or plug into guitar. But it wouldn't be very difficult to change which way to wire the thing. In fact, it's just two solder joints away. And since this device doesn't fit into all amplifiers (or guitars like stratocaster) it's a good thing! I did change the original switch since it was very loose and unreliable. It's mechanical component and worn parts are difficult to fix. So it had to go. New switch is practically identical. Potentiometer, jack and plug are all originals and in good condition. I was very happy to save the original potentiometer, since it has the only dating evidence: 1377219. Week 19 of 1972. And don't you worry, there is a permanent note inside saying it's a rebuild. Like it's some fucking collector’s edition anyway... 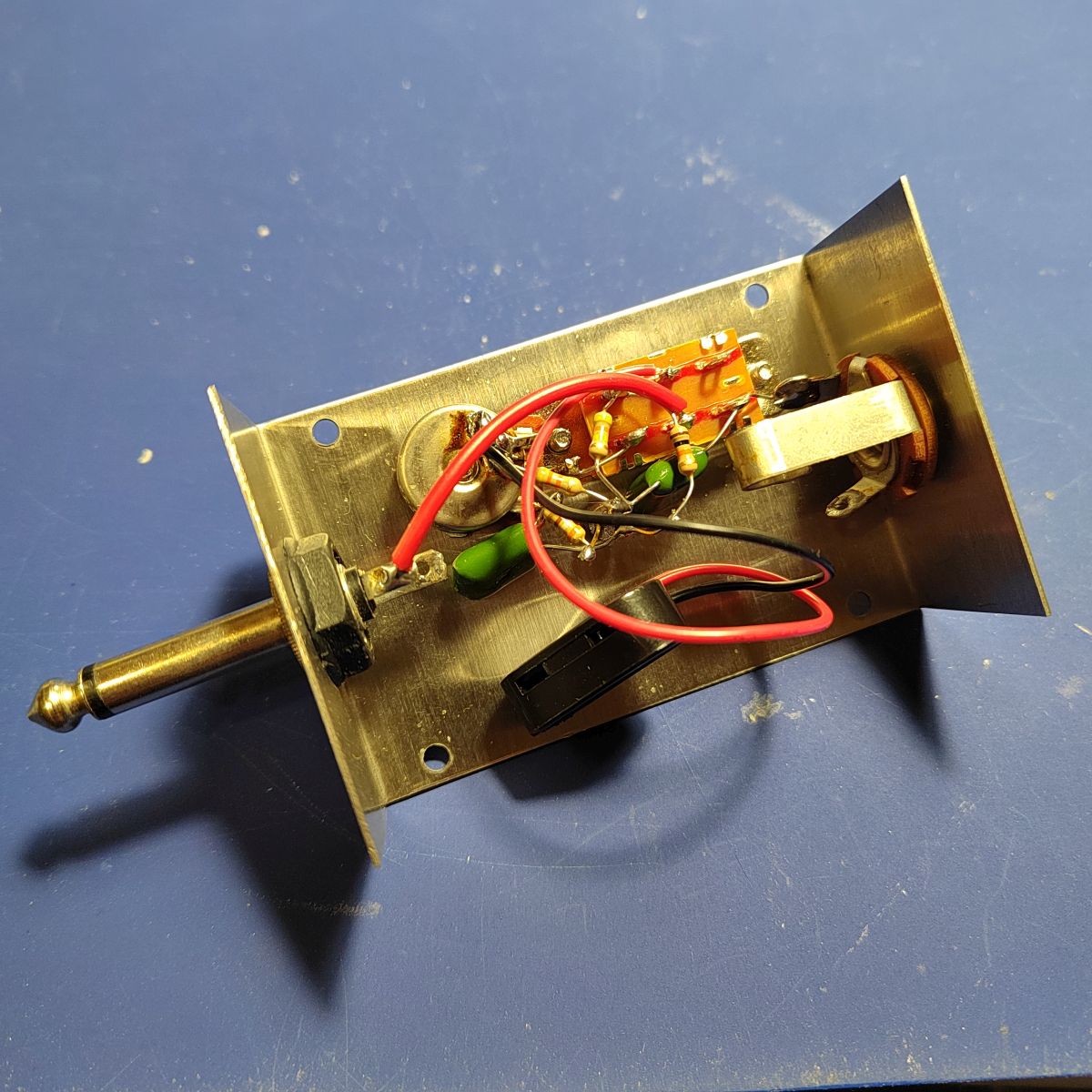 Worth it. 100% all the way. Not only because it's now much more reliable but now I actually like to use this again. Before the rebuild it was in my drawer collecting dust as a broken piece of junk. Some collectors might be mad, but I don't care. I'm not one of them anyway. Old, tired and broken booster got a new life, and it also has some (personal) history and memories behind it. That's much more valuable to me than any ebay or reverb listing will ever be.

This might be the earliest published LPB-1 clone:
"Big Boost" by Herb Friedman
Elementary Electronics 3-4/1980